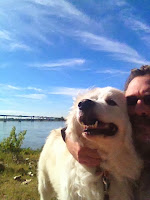 I forced myself to return here today.

This blog will break your heart. Not because of Hudson - we didn't get the lab report in today and although that does cause some consternation, we suspected as much.

It'll break your heart because of what the Mississippi River represents to this cause of ours for two reasons.

1. Back in August 2008, we stopped at the juncture of I-40 and I-55 because, well, there's nowhere else to go.  Or to get across the river.  There are no pedestrian bridges and since Hudson and Murphy are hydrophobic, no chance of swimming across either.

About and around this time, we met Ginger who was the Executive Director of the Humane Society and when I shared our plight with her, she suggested we cross via her boyfriend's boat moored in Harbortown:  pina coladas, pink umbrellas, and perhaps a seersucker suit for myself.

Problem was, that's not my style. I didn't walk 600 miles to Memphis to play fancy.  50% of all watershed in the US flows down the river to the gulf and there was no way I wouldn't meet her mighty maw.

I asked Ginger to find another way and she contacted the mayor, police chief, and a congressman and all said 'No.'  There was no way to cross the river they said. Maybe upstream somewhere.

Well for those of you who know me, the phrase 'It can't be done' doesn't really translate or process in my brain.

Clearly I-40 was impassable unless the whole city, county, and state shut down the bridge and they weren't doing that for dogs.   But after scouting out I-55 I felt there was something, possibly a utility bridge.  Turns out, my instincts were spot on & against all odds, Hudson, Murphy & me walked across the mighty Mississippi.

2. The second time I was on the banks of the Mississippi when I was saying goodbye to Murphy in 2011.  He and I were there late at night all alone, listening to the passing barges signalling for safe passage.

That night, I, too, sought the same.

But because I couldn't save him, I wanted to walk him down to the rocky shore to the swift and certain currents that would drown the two of us together and ultimately spit us out in the the Gulf Coast.

'Oh No, H2O' was why I didn't.  Murphy never liked water and that's why I couldn't.  Or at least I told myself that at the time.

I don't know how to give up.  And the four forces of the universe don't permit me to either.  Malcolm, Murphy, Hudson, Indiana.

I say do as my dogs would have me do and that is to keep on fighting, live everyday to the fullest, enjoy each moment and become a better person because of what they taught us! Praying for you and your boy!

This is Rachel Hale from Facebook. Just wanted to say thank you for including us in everything. Really feel like part of the family & considering I've lost everyone it means a lot to me. Praying for you all and for a complete recovery.