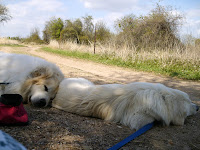 Colin Fletcher, roundly regarded as the godfather of hiking, used to say that on long walks, the first few weeks are always the hardest. I always assumed he was referring to the physical and mental adjustments one must make but having been on the road for almost a fortnight, I know now he spoke of something much deeper.
But we've gotten through the tough couple of patches together, as a team, and are finally reaching our rhythm. The boys are soldiering on like little Spartans. We're now clearing 7-8 miles a day and since we left Austin, crossed two counties and covered fifty plus miles. Here are some of the stories and encounters we've had along the way:

While we were hunkered down by the particularly nasty storm system that bore down on us just a day after we launched, we had a whole host of kind and considerate people who stopped to warn us about the weather. And then came Lloyd. I mean this guy must've seen too many episodes of Walker, Texas Ranger and Judge Joe Brown. He drove up in his two ton truck, didn't even bother to get out, and almost immediately told me I was full of s***. No introductions, no niceties, just right out with it he went. I suppose he saw us on Fox News 8 in Austin and got it in his mind I was traveling from town to town taking hard earned money from the innocent.

He said it was because we hadn't made it too far in the two days since we started. Had he heard about the weather I started to ask but this guy was in no mood to listen. Nope. Going at our current rate, it would take us four years to get to Boston. He did the math. That's animal cruelty and he was calling PETA on us. I asked him if he knew the meaning of irony... a farmer with 200 head of cattle calling PETA on me. My guess is he's still scratching his head on that one.

Lloyd then said he'd have us arrested by the Manor police when we reached that town's city limits. I was about to make the wry observation that when making threats, start small then go big not the other way around but it seemed pointless and besides a storm was coming and I had preparations to make. At least he gave us something to laugh about that night ....and good material for the blog!
Riding out the Storm

Fortunately, we were spared most of the stark predictions like flooding, hail, and tornadoes, but fierce northwestern winds came howling down upon us and more than once almost collapsed the tent. The boys were beside themselves so I put my hands on the two sides of the tent hit the worst, leaned back, and pretended I was asleep. Within minutes, Hudson and Murphy curled up next to me and slept through it all. It's an important lesson I'll recall throughout our travels. 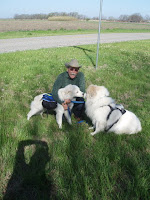 After a tough start, it was truly a delight to have a home cooked meal and a warm bed at the Wilton's home. Carolyn is a most excellent cook (don't forget to email me your recipe for Tomato Gravy) and Wilton, a generous, big hearted man. They took me into town to resupply and replace the sleeping bag I lost somewhere on 473. They're everything I will miss about the Great State of Texas when I return to New England. Thanks again for your hospitality. 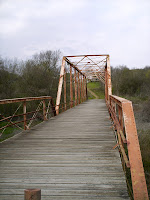 There is truth to the saying that a fire warms the soul of a traveler and Easter night, we were fortunate enough to find a site at Taylor Park and have our first campfire. It's a small but pleasant place where we met some endearing characters including a pair of twelve year old paranormal detectives, Alice and Bella.

Hudson and Murphy took to them instantly and we joined them for some sightseeing. One of the most curious sights was Hoxie Bridge, cranky, completely out of place, and yet reputedly haunted by the headless ghost of a murdered convict who helped build it. Hudson peed on it. 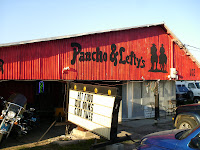 From there we headed east towards a jerkwater town of fifty or so people called Hare which is unremarkable and not unlike so many in Texas except for a little dive of a bar and restaurant owned by Mike and Lynda, who graciously allowed us to pitch our tent in the back. 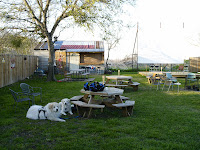 I'm telling ya, everyone in that place was kind and giving from the waitstaff down to the patrons. Mike, a very capable grill man, fixed a special plate for the boys and treated me to a warm dinner and sandwiches for the next day. Every Monday night a group of guitarist gather to share songs and work on chords. So I kicked back and drank a few beers to some blue grass and gospel music. Quite a splendid way to spend an evening on the road. Thanks also to Christina, Christie, Dan, Lucas, Clayton and everyone else at Pancho & Lefty's!

Life on the Road

Not every night's been quite that ideal but we're learning to weather the hard times, too. It helps to have mates like I do and I don't just mean Hudson and Murphy but all of the volunteers who are devoted to seeing this succeed. Until next time my friends... puppy up! 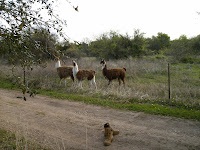 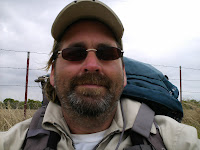 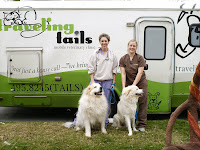 It must've been fate to reconnect with Malcolm's former veterinarian in San Antonio, Dr. Tracy Tommack. I was first turned on to her by a friend in 2003 because she had this really cool mobile vet unit which was convenient for my 7 day work week.
Truthfully, I had forgotten about Traveling Tails and was searching for a clinic nearby to weigh the boys and administer their vaccines before we left. Then I saw them in the directory and not only did they still have the van but had grown into a clinic, too.

It came of little surprise to me, though, as I was always impressed with Dr. Tommack's bedside manner and she has a Pyrenees, too! I emailed her about the walk and she drove right up curbside Thursday the 13th, gave the boys a physical examination and vaccinations, and even clipped their toenails, too. Teresa, holding Hudson in the photo, is her technician and she handled the boys expertly.

Murphy's weight - 108 pounds, Hudson clocked in at 57. Both were given a clean bill of health although the wee lad did have an infection around his groin area. I got off without his antibiotics which created some chaos during the first days of the walk but it has since healed up just fine. Thank you for everything Teresa & Dr. Tommack...
Posted by 2 Fuzzybutts and a Big Dog at 11:55 AM No comments:

Taking Malcolm With Us 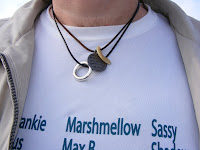 For reasons which still remain unclear to me, I put off trying to find a company willing to donate cremation jewelry for Malcolm's ashes until almost the last moment. I knew what I wanted and why.

Then I came across Everlasting Memories and their message of family and friendship spoke to me. I immediately called, talked with Donna and after pitching the walk to her, she said she would forward the information to the owners.

Within just two days, I received a kind and heartfelt letter from the founders and proprietors, Casey Doran and Brandon Jurasek, and in it they offered to donate a necklace so that I could carry Malcolm with us on our journey. I selected the sterling silver eternity keepsake shown in the photograph nearby (taken by Jennifer Hayes with the Best Friends Animal Society)

It's absolutely lovely and it hangs next to Malcolm's toenail (long story) and the Saint Francis my mother gave him years ago. Now that we're on the road, not a day passes without my 'Malcolm' moment. I place the keepsake in the palm of my hand, thank Malcolm for that spirit which was his and the mission he has given us. Thanks to Ever Memories for making that possible.

Update from Luke who is in Taylor, TX and heading toward San Gabriel

I wanted to give everyone who visits this forum an update of this week so far since the guys sat out the first half weathering some serious Mother Nature! It would seem that the Austin area was hit this week with some of it's worst weather in years-typical, eh?

Much like when I went back home to NJ (from FL) to visit family in 2003 only to get blasted with the infamous "Presidents' Day Blizzard".

My own personal thoughts on this is that whenever something really special is planned such as this walk (and my visit home in 2003 was my first in a few years) -Mother Nature decides to test you right off to make sure you're worthy, and good old "Murphy's Law" takes up residence.

Well~ the guys weathered the storms and the challenges of Murphy's Law just fine and were able to finally start putting some miles behind them -YAY! :)
Posted by 2 Fuzzybutts and a Big Dog at 11:03 PM 1 comment: