Much Richer for the Experience by Abby Kirkland 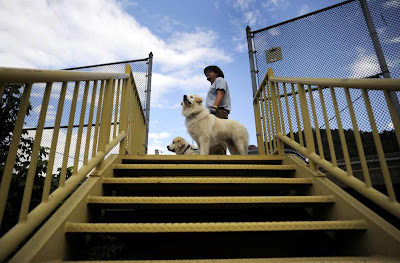 Canine cancer is a terrible disease that touches and has taken the lives of many of our four legged family members. No one knows that better than Luke Robinson who lost his Great Pyrenees to osteosarcoma in 2006 after a long two year battle. Luke is committed to raising awareness to determine the causes of canine cancer, as well as promoting 'comparative oncological' studies (a fancy word for using the experiences of canines to learn more about both canine and human cancer). To promote awareness, Luke and his two Great Pyrenees, Hudson and Murphy, are committed to walking from Austin, Texas to Boston, Massachusetts, stopping along the way to educate the public on his cause. It is during his trek through Pittsburgh, Pennsylvania that I had the pleasure of meeting Luke and his 'boys.'
It began in February when my husband came across Luke's website, www.2dogs2000miles.org and mentioned it to me. After viewing it and noticing that they would be walking through Pittsburgh, I emailed his 'coordinator' and 'commander in chief, Ginger Morgan to offer our house for a night or two as they passed through, something totally out of character for me---but yet something I felt compelled to do. She graciously accepted and as 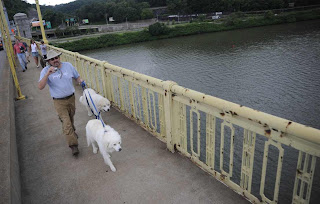 the time grew closer to Luke's arrival in late June, Ginger mentioned that Luke was hoping to touch a lot of people in the Pittsburgh area. I became determined to help Luke in his endeavor.
Luke arrived in Pittsburgh on June 29 and our family was introduced to a very focused, compassionate man, who was determined to make a difference in advancing our understanding in the causes of canine cancer. He was a very outgoing man with several funny stories about his travels and clearly a man who loved his dogs---those with him and the one that had moved on. During Luke's week with us as he attended various events and walked around the Pittsburgh area, I was not only touched by Luke's compassion to those people he encountered, but also by the people who encountered him. People would come up to him on the street and begin pouring their hearts out about how their lives had been touched by canine cancer and Luke would listen and offer words of condolence and encouragement. They would pass by and hand him money, 'blessing' him as he continued to further his cause. And they would take the time to ask how they could help him going forward.
For me, what started out to be offering a man and his dogs with a mission a place to stay became much more. It was a wonderful example of the goodness and kindheartedness of the human race and how we all can pull t 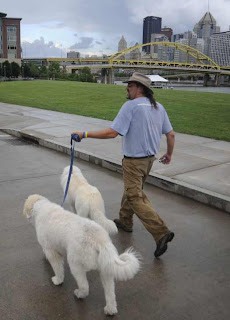 ogether to support one cause. I was able to meet and work together with people that I never would have otherwise met--people who believed in a common cause. And Luke was able to offer understanding and comfort to many. However, it seemed to me that he got comfort from them as well as they shared their stories of illness and loss. Luke set off on the next leg of his journey this week and many of us will go back to our lives. I for one will go back that much richer for having this experience.

So, I urge you, as you see this man on his journey with his two white dogs, take some time to stop and offer words of encouragement, share your story, or just stop to chat. You won't be sorry that you did.

Abby Kirkland is a Brokerage Director and her husband Kevin Kirkland is a Features Editor for the Pittsburgh Post-Gazette. They live in suburban Pittsburgh with their 2 boys, 3 labs and 2 cats.

Photos from the Yough River Camp 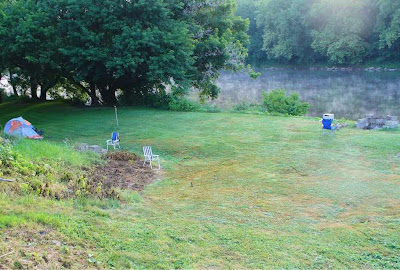 Thanks go to Marei Burnfield for taking these shots of Luke and The Boys while they were camping out Wednesday Morning 7/15/09 on the banks of the beautiful Yough River in Blythedale, PA.
The Yough (short for Youghiogheny) River Trail is part of the Great Allegheny Passage Luke and The Boys are traveling. The Passage occupies abandoned corridors of the Pittsburgh and Lake Erie Railroad and Western Maryland Railroad. When completed, the Great Allegheny Passage will stretch 150 miles from Cumberland, Maryland to Point State Park in Pittsburgh, Pennsylvania, with a 52-mile branch to the Pittsburgh International Airport. 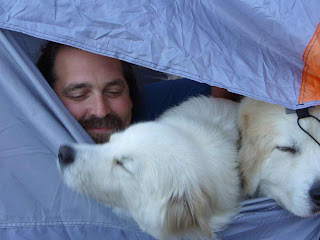 The Yough River Trail is a non-motorized multi-use rail trail that stretches 43 miles between McKeesport, PA and Connellsville, PA. It is part of the Great Allegheny Passage that will one day allow cyclist to bike fro 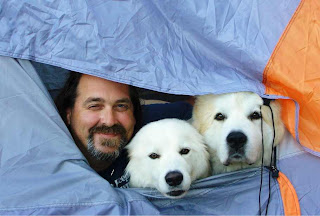 m Pittsburgh, PA to Washington, D.C.
It is named after and runs along the Youghiogheny River. The trail surface is composed of crushed limestone.

During the colonial era and in the early United States , the valley of the river provided an important route of access through the mountains for settlers and military forces from Virginia to western Pennsylvania and the Ohio Country. In 1754, as a militia officer of the British colony of Virginia, George Washington followed the river in an attempt to find a water route to Fort Duquesne, then held by the French.
Posted by Erich Trapp at 9:00 PM No comments:

From Pittsburgh to DC

Yesterday (Sat) while making our way down Rte 51 to Elizabeth PA, a guy in a van stopped us. He'd heard about us and suggested we take the Rails to Trails hiking path from Pittsburgh to Washington DC. It wasn't the first time I'd heard about it but since our mission is about awareness & education, I never seriously considered it. Afterall, this isn't a nature walk we're on.
He made the case that not only are there a ton of people on it this time of year but lots of cities lie on its path, too. So I gave it a hard look and consulted with a few knowledgeable about it.
In many ways its ideal for us. (1) It's a fairly direct route to Leesburg VA which is our next major stop and (2) As it is basically a converted railroad line, the grade of the hiking trail never exceeds 2% despite that it starts at 850 feet, climbs to over 3,200, and back down to sea level in DC.
Third and most importantly - no cars! Like some live version of Frogger the Video Game, we've been battling traffic for the past 1,300 miles and honestly, we could use a break.
Tuesday, we'll start back in Elizabeth PA, continue down Hwy 51 to Cedar Creek Park where we'll pick up the first leg of the Trail called The Great Allegheny Passage. This stretch is approximately 150 miles and ends in Cumberland, MD where we will connect with the old C&O Canal that'll take us right to Leesburg VA.
We have big plans for the area and can't wait to get there!
If you'd like to meet up with us at any point of our travels from Pittsburgh to DC, please contact ginger@2dogs2000miles.org and she'll tell you our exact location.
Posted by 2 Fuzzybutts and a Big Dog at 6:57 AM 3 comments: 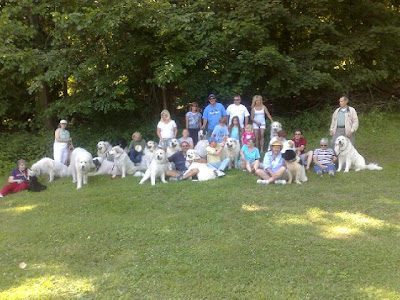 Before The Boys hit the road again, they had some fun at the PyrNic at Southpark Park July 5th. What’s a Pyrnic? Well, apparently it’s a gathering, assembly, meeting, and conglomeration of a lot of Great Pyrenees and their people for a picnic – thus, PyrNic. Pretty clever, don’t you think? Hudson counted “1073 big white friends & 2000 big black noses!” but Murphy was quick to point out (because he is The Smart 1) that “u don't know how to count u can't have more noses than dogs silly!” In actuality there were NOT 1073 Great Pyrenees at the party, but there were a lot, all of them smiling! Of course, Murphy wanted to know if there would be food, and Hudson wanted to know if there would be girls. There were both, so both Boys were happy. And Luke got to meet some great people, so he was happy too! 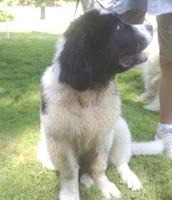 Champ is a Landseer Newfoundland. Now, how did he get in here? Well, maybe they let him in because of his size! 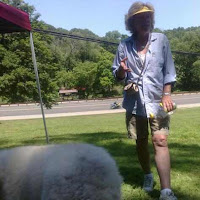 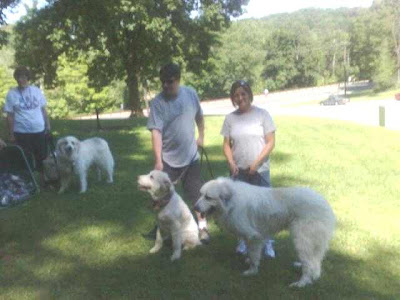 Mike, Tammy, Logan, and Maya drove in to enjoy the day with other Pyr friends.
Posted by Erich Trapp at 9:02 PM No comments:

Last nite was bittersweet. I watched a magnificent display of fireworks atop the Western Penn Humane Soc building. This brilliant show was staged at the 'Point', the confluence of 3 rivers, the Allegheny, Monongahela, and Ohio. These awesome explosions of light were amplified by reflections off the rivers and it was truly something to behold.
But it was bittersweet because this past week 3 of our supporters' dogs were touched by cancer, two of them passed & another just diagnosed. All were under 4 years.
My heart's afire...
What rage must've burnt deep inside the souls of the Revolutionaries and last night, witnessing the fireworks from dowtown Pittsburgh, I really felt it. Happy Fourth.
Posted by 2 Fuzzybutts and a Big Dog at 7:05 AM 1 comment:

Losing a pet is tough. When my beagle died at the ripe old age of 14 it was harder than I ever realized it would be. Woody was the greatest. He was there with me when the kids grew up and he was a part of our family. Ten years later I opened my dog wash and named it Woody's. The store revolves around relationships with your dog ... bathing your own dog so you can spend time together, selling healthy pet items, and working with shelters for advocating adoptions. Dogs are treated the way I would have wanted my dog to be treated. Woody is gone but his memory lives on. 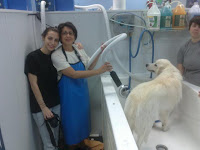 Luke has gone much further and it is obvious that losing his dog has been a life changing experience. Hopefully this walk will benefit awareness & research of canine cancer. His walk from Texas to Boston is proof of the strength of the relationship between people and their dogs.

I am totally looking forward to meeting Luke & his boys on Thursday at Woody's Dog Wash & Boutique. Murphy & Hudson will be getting bathed and fussed over and should be looking dapper for their evening at the Humane Society. This is an experience that most of us will never have the resilience to do, but we can all relate to Luke's love and dedication to the dog he lost. He is an inspiration to the rest of us. I know that Woody would be happy to know how much good has come out of our shop and that Luke, Murphy & 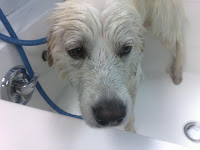