Zero At the Bone 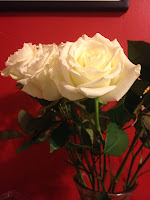 A narrow fellow in the grass
Occasionally rides;
You may have met him,--did you not,
His notice sudden is.

The grass divides as with a comb,
A spotted shaft is seen;
And then it closes at your feet
And opens further on.

He likes a boggy acre,
A floor too cool for corn.
Yet when a child, and barefoot,
I more than once, at morn,

Have passed, I thought, a whip-lash
Unbraiding in the sun,--
When, stooping to secure it,
It wrinkled, and was gone.

Several of nature's people
I know, and they know me;
I feel for them a transport
Of cordiality;

But never met this fellow,
Attended or alone,
Without a tighter breathing,
And zero at the bone.


Truthfully, I've never been a fan of Emily Dickinson.

I came down to Memphis to say goodbye to Murphy something I haven't been able to do.  But it's time.

Murphy was Menschkeit.  Maybe he was the thing that made Malcolm so much of me.  And maybe that's why I miss him so.

I've been reading Victor Frankl's 'Man's Search for Meaning' and in it he writes,

“But there was no need to be ashamed of tears, for tears bore witness that a man had the greatest of courage, the courage to suffer.”

I wonder if that's what Emily meant.  There is no more absolute than zero.