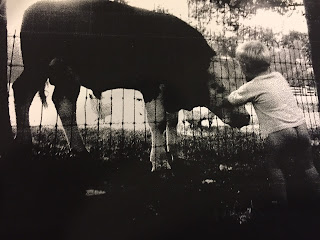 The boys and I are back from a brief jaunt down to Texas to support the Puppy Up walk in the Woodlands and for a short visit with my family.  Quite happy to be back as I have missed my friend.  Crap, I still haven't named him.  Um let's go with...

I know some of you are saying, he's talking about himself again - why does he do that?  And where's the cancer blog? Like any capable contestant, I'll take the second part first.  Trying to reduce, distill and refine all that I have learned over a decade of  travels in a few mere blogs is not only dreadfully difficult, it's daunting, too, and on this I want to get it right.  Or mostly right which is more kin to my nature.

In the past, there have been blogs I've powered through in just a few minutes with a fire and forget mentality.  Others haven taken days and even weeks for a paragraph or less.  And that's not to mention that for every blog I publish, there are at least ten I don't.

But if it's a sneak peak you want then I'll give you a little taste of part 1:  Cancer is You.  You are Cancer.  From just the title alone perhaps you can estimate the enormity of the undertaking now.

Next, I used to get irritated by people - and there have been many - who want me to remove myself entirely from this story and stick to topic whatever that means.  Not only is that an odd request since it was me - ex animo - who created all of this - but I rather think I matter.  And I'm far from being done.  But as The Dude would say, that's, like, only my opinion, man (Heads up for the F Bomb).

Besides as I hinted at in the previous two blogs, all of these 'distracting little posts' about me are going somewhere and I suggest now would be the time to start paying attention if'n you want to begin this stretch of the journey alongside me.

That's what I'll call my friend!  Sounds a little pretentious and overly caricatured, too, but I'll stick with it. Anyway back to the beginning - it's good to see him again and we have continued our work together and this is what I wanted to share with you.  It's important to note that I'm merely a student at this point but it's pretty powerful stuff.  Especially altered states which I intend on speaking separately about.

Whilst down at my folks house I came across an old photo album - actually I sought it out.  In part to retrace the tracks of my life and for another reason that will soon become evident.  And in it I discovered the above photo of a half naked me facing a bull cross fence at Big Momma's house (that's what we called my 80 lb grandmother cause man could she wield a skillet like a battle axe).  What struck me, other than how large my bollocks must've been but also how at peace I seem.  Maybe it was two beasts regarding each other and that's why I was unafraid and perhaps even comforted by his presence.

I never have taken a liking to the term 'beast' or what I sense is its social nuance.  Its implication is negative and connotations derogatory.  To me it means true to ones nature; it is base, fundamental and instinctive.  From my research the etymology of the word remains unclear however, the root of 'animal' is Latin meaning breath or spirit. I suppose the distinction between the two words 'beast' and 'animal' is essence versus being but I'll leave that one up to the scholarly sorts who have a ton of disposable time.

To me and for now, they are synonymous.  I am reminded of a story I once read of a boy who, all alone and lost in the woods, becomes a beast to protect himself from the perils of the night and fight his way to safety.  But upon emerging from the forest unscathed the boy learns that he cannot unbecome.

So what's the point of all of this?  What's the purpose?  Somewhere along my journey I stopped asking the fundamental questions that preoccupied my youth.  Like tears in rain they became lost in life's torrent of distractions, inanities and wasteful activities.

Renwick has helped me find who I am again and to truly know it for the first time.  I am a beast of a man.

What's next - it's damn time I learn how to train it.